For the next week we’re offering 50% off one of our latest products, Grain35. Grain35 features real 35mm and 16mm film grain you can easily add to your own footage to create the texture of real photochemically processed film. Grain35 is available at both 1920×1080 and 4K resolutions and works with Final Cut Pro 6, 7 and X. Just use the coupon code: SURP-0050-GRAI-0827 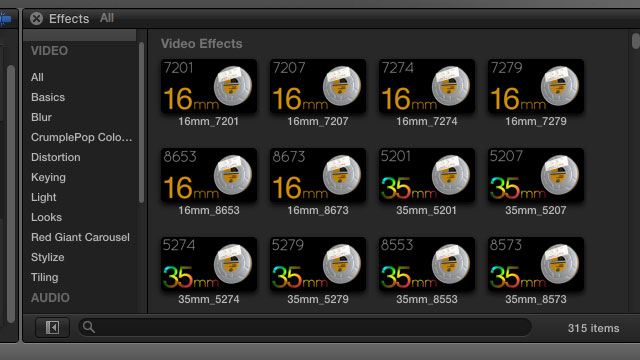 You have until the end of the day Tuesday, September 4th to take advantage of this deal. Just enter the coupon code when checking out.

You can download a free trial version of Carousel here.

Carousel is our first collaboration with the awesome team at Red Giant – the guys who make Magic Bullet Looks, Mojo, and many other extremely useful tools for Final Cut. We’re super excited to be working with them, and we think you will be very interested in what we have coming for FCP X.

We had of course watched many tutorials by Red Giant’s Aharon Rabinowitz over the years, so the experience of skyping with the actual Aharon Rabinowitz was a bit surreal. Maybe like watching one of his tutorials while you are very tired or have food poisoning, because you can talk to the screen and Aharon Rabinowitz will talk back. Eventually it became normal (sort of), and we were able to work with Aharon and Harry Frank, who developed the cross-processing and film fading, and sent us a series of unexpected and increasingly disturbing .gifs that did not relate to the project directly.

We hope you enjoy Carousel. Here’s the official press release.

Last Day To Save $30 Off Any Product

Today is the last day to take $30 off any product in our CrumplePop store. Just use the coupon code: SURP-0030-ANYP-0618

Warm weather has come around and for the next week we are offering a very special $30 off anything in the CrumplePop store including the recently released ColorKit Suite. Now is a great time to pick up some of our newest products like OverLight, HalfLight or TransiMatic. Just use the coupon code: SURP-0030-ANYP-0618

Check out all of our products by clicking here

You have until the end of the day Tuesday, June 26th to take advantage of this deal. Just enter the coupon code when checking out.