When we first released CrumplePop Lumineux, we annouced it would be compatible with the new Final Cut Pro X. If you’re wondering exactly how it works, look no further. Lumineux is just as easy to use within the new final cut. Much like Final Cut 6 and 7, it only takes a few steps:

1. Import Lumineux
2. Find where you want to place the light leak
3. Drag the clip down
4. Double click on the clip
5. Scroll down in the inspector window until you see to composting
6. Choose your ideal blend mode (we suggest overlay or add)
7. Find how much opacity you want

That’s all it takes. Check out the video for a more in depth view.

If you’re interested in taking a look at more of Lumineux’s features, check out our preview page.

Check out our latest release: The MagicPop Bundle.

To see more info on each of the products, check out our MagicPop Bundle page.

Check out these stills to see what footage looked like before and after using the MagicPop Bundle. 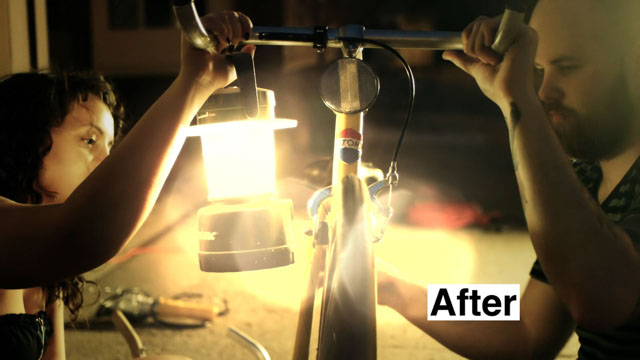 The MagicPop Bundle is available here for $199.

Over here at CrumplePop, we’re big fans of extreme sport videos. Often when we’re looking through Vimeo videos, we’re taken aback at the current state of extreme sport cinematography. Many videos are pushing the limits of innovation and creating gorgeous scenes of skateparks, streets and waves. A couple of days ago we received an email about a beautiful video by Mitch Payne that used Lumineux. Lucky for us Mitch was able to have a quick conversation about his video.

Can you explain the video to us?

Dan (the rider) broke his knee cap a few months ago so has been out of the water, I had some footage from a trip over seas we did together combined with some go-pro stuff he sent me sitting on a drive not going anywhere, so I thought I’d put it together to get him amped on getting back in the water.

What camera (or cameras) did you use to shoot this? What was your workflow like?

Its 50/50 GoPro and Sony V1P footage. The HDV stuff from the Sony was fine, the GoPro footage always needs some tweaks. A lot of the time riders that send through footage from their GoPro are playing around with formats in the water so you’re going to get a mixed bag of cinema tools and MPEG stream clip fun at the end of the day. 9 times out of 10 the wave you wished they shot in 60fps wasn’t .

You’re shooting in pretty rough waves. How did you keep your camera safe in the waves?

The GoPro’s are a tough little beast, I haven’t heard of anyone having a leakage problem yet, in fact I’ve seen a clip of a go pro falling from the stratosphere floating around on Vimeo I think is a testament to their sturdiness. My V1 was in a custom fibre glass housing made by Dave Kelly.

Why did you choose to use Lumineux and how did it effect your production?

I first brought shrink ray from your site and was really happy with the results since then I’ve always checked back on your site and read your blog to see what was coming next. I think that light leak look can be really effective, though to buy the stock footage or similar looking effects coast an arm and a leg. When I read about Lumineux and watched the demo clips I had it downloading within 5 seconds I think haha.

I also chose Lumineux as they are I guess they ‘proper’ light leaks recorded on digital so they would sit nicely with my HDV footage. Stock footage for similar effects is all from 16, 8 or 35mm and from what I’ve seen you get film grain in your transitions. Overlaying a digitally recorded clip over another just looked a lot more aesthetically pleasing to me.

Thanks a bunch to Mitch for taking some time to speak with us! 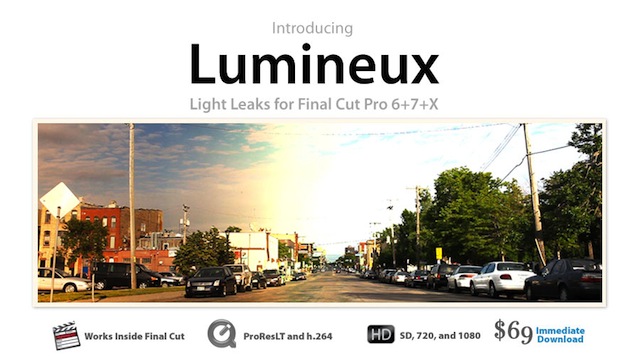 Today’s the last day to pick up our latest product, CrumplePop Lumineux for the sale price of $49. Lumineux features more than 50 distinct light leaks for FCP.

After today, Lumineux will return to it’s normal price of $69. To see more info, check out our post on Lumineux.

We have released our newest product CrumplePop Lumineux.

Lumineux features easy to use light leaks for Final Cut Pro 6, 7 and the upcoming Final Cut Pro X. CrumplePop Lumineux works quickly and easily to add light leaks to any FCP project by simply dragging and dropping right inside of Final Cut Pro. You simply choose a clip, drag it to your time line, click overlay, render and you’re done – you’ve created your very own Holga-style light leak.

You can choose from among 7GB of 57 different light leaks and transitions or mix and match to create your own. Each light leak is extremely high-quality, offered in both ProResLT and h.264. They are completely customizable also, allowing you change the colors and add additional effects.