Marshall Monitor With HDMI Loop Through

Vincent Laforet revealed Marshall’s new monitor. What separates the V-LCD70XP-HDMIPT from the others is HDMI loop-though and DSLR frame adjustment. This is the first monitor to feature an extra HDMI output for a second monitor. It also features a way to view the true ratio of what your DSLR is shooting (if you need your footage in 4:3 you can see it cropped to 4:3.)

Check out the video above to see how it all works. The Marshall V-LCD70XP-HDMIPT starts at $1199. 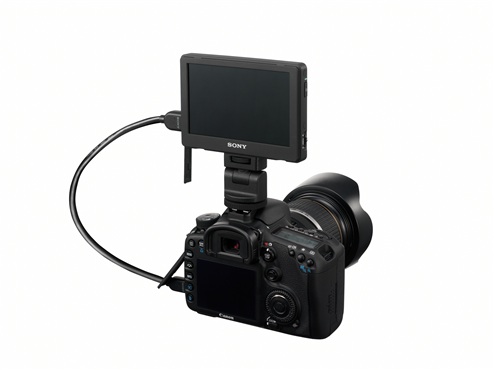 Sony announced its very own 5″ 800×480 LCD monitor for DSLRs (and camcorders.) The CLM-V55 clips on to the top of a DSLR and connects via HDMI. You can position the direction of the screen which should come in handy. It also features a head phone jack, which if you’re like me, is a necessity (and often the downfall of using a DSLR.) No price has been attached to the monitor yet. Sony expects a March release.

Check out Sony’s press release about the CLM-V55 for more info.