Home → AKG Lyra vs Blue Yeti: Let’s Find Out Which Mic is the Best!

AKG Lyra vs Blue Yeti: Let’s Find Out Which Mic is the Best!

The AKG Lyra and Blue Yeti are great USB microphones with a reputation for good sound, versatility, and charismatic looks. But how do these mics compare head-to-head?

In this post, we’ll look at the AKG Lyra vs Blue Yeti to help you decide which is best.

And don’t forget to check out our comparison of the Blue Yeti vs Audio Technica AT2020—another great head-to-head battle!

At a Glance: Two Classy and Capable USB Microphones

The key features of the AKG Lyra and Blue Yeti are shown below.

The AKG Lyra is a classy-looking USB mic with vintage appeal, superior sound quality, and a relatively robust build.

The Blue Yeti is a quirky-looking and versatile USB mic with a robust build, good sound quality, and useful features.

Let’s take a closer look at the features of the AKG Lyra vs Blue Yeti.

Both the AKG Lyra and Blue Yeti are USB microphones that can be connected directly to a computer, so you won’t need an additional piece of hardware such as an audio interface.

Both mics also have headphones output connections (with a 3.5 mm jack), complete with volume control and direct monitoring, so you can monitor your microphone’s input with zero latency. 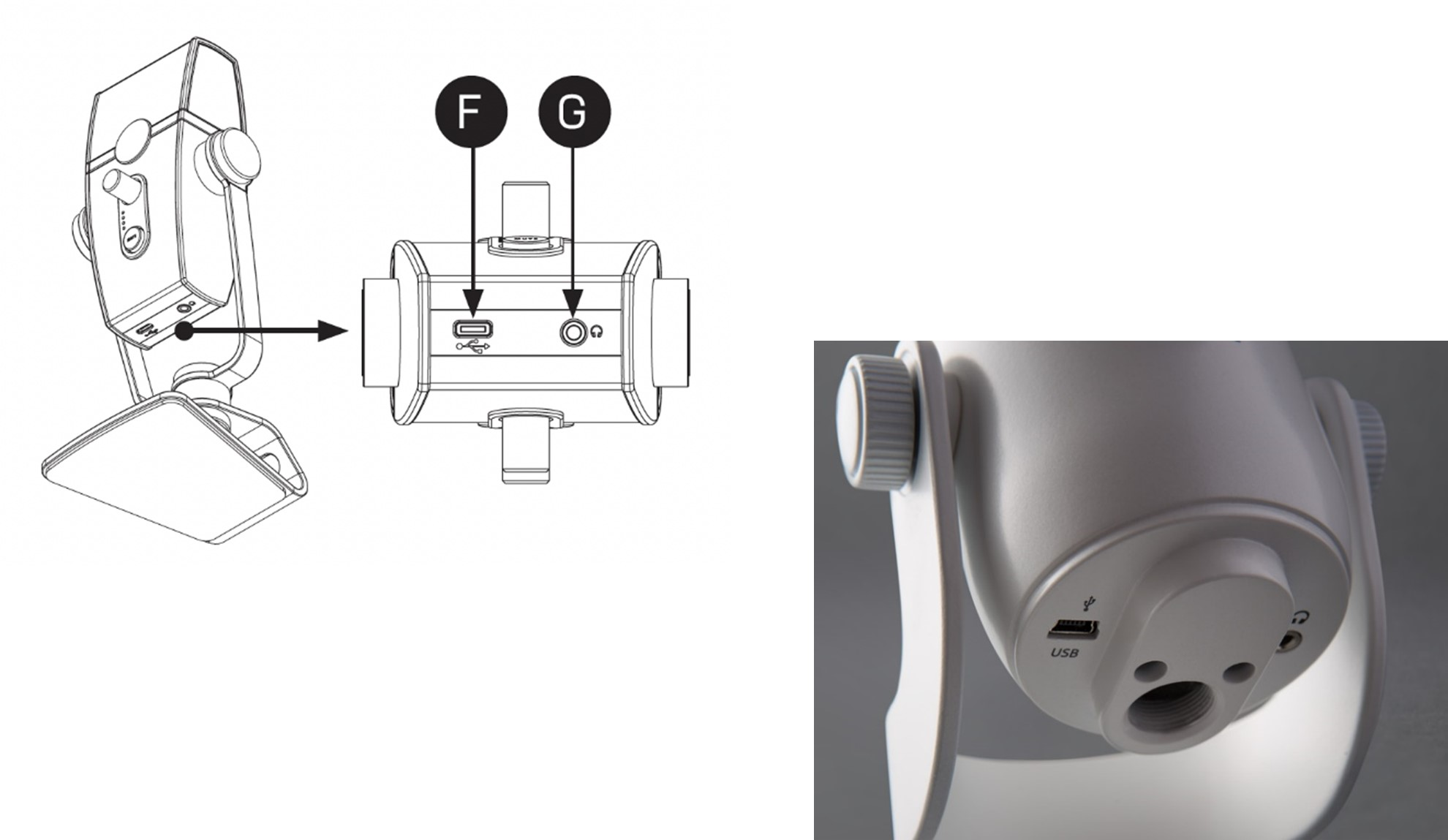 The AKG comes in one color option—a black-silver combo that speaks to its vintage looks—while the Yeti gives you three choices: black, silver, or a (rather striking) midnight blue.

Key takeaway: Both mics are large and make a visual impact, although with very different esthetics.

Both mics have a reasonably solid build quality with sturdy, metal stands. The knobs on both mics, however, can feel a bit flimsy when you handle them. The AKG feels less sturdy overall, as it has a plastic body (albeit with a metal mesh) while the Yeti is all-metal.

In terms of maximum sound pressure levels (SPL), i.e., the maximum loudness that the mics can handle before they start to distort, the AKG can handle louder sounds (129 dB SPL) than the Yeti (120 dB SPL).

This makes the AKG more versatile for recording louder sounds, like drums (that aren’t too close) or guitar cabs.

Key takeaway: The Blue Yeti’s all-metal body gives it a more robust build quality than the AKG (which has a plastic body), although the higher maximum SPL of the AKG makes it more useful for recording louder sounds.

Microphone pickup patterns (also called polar patterns) describe the spatial pattern around a mic from where it picks up audio. Both mics offer four polar patterns—three are similar between them and one is different.

The three similar patterns are:

The fourth pattern differs between the mics: 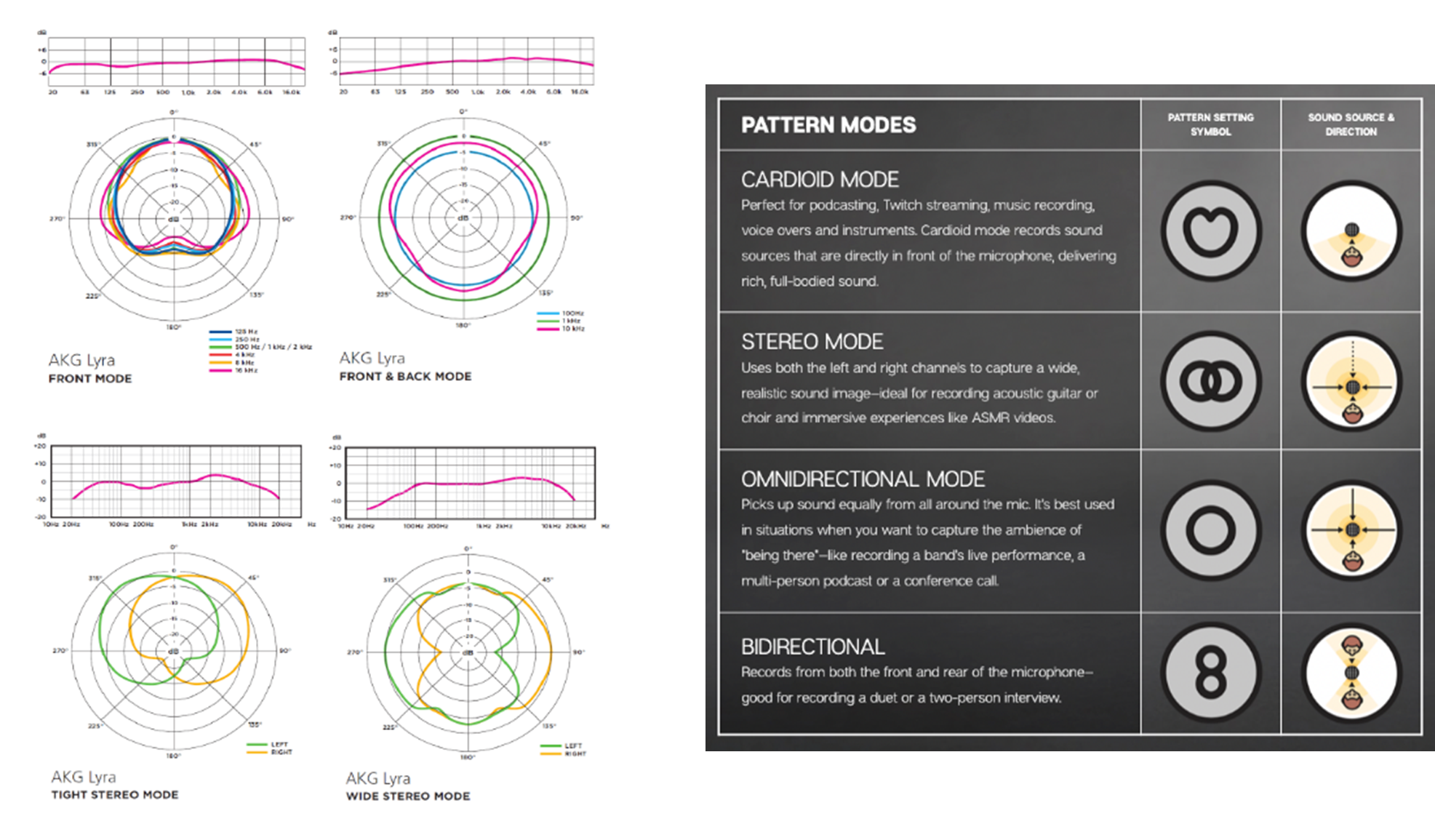 You can switch between the four polar patterns on either mic. This is a useful feature if you’re interviewing a podcast guest, for example, and only have one mic to work with.

Key takeaway: Both mics offer a choice of four polar patterns which gives you the flexibility to adjust the pickup regions depending on your recording circumstances.

The frequency range of the AKG Lyra (20 Hz–20 kHz) is slightly wider than the Blue Yeti (50 Hz–20 kHz), while the frequency response of both mics varies by the choice of polar pattern.

In comparing the cardioid responses of the two mics (typically the most used polar pattern): 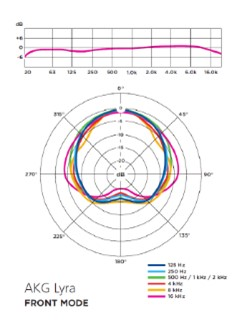 Overall, the AKG has flatter response and less of a dip in the vocal range (i.e., 2–10 kHz), providing a more faithful reproduction of sound than the Yeti. It also has more coverage and less of a dip at the very low end (below 100 Hz), giving more warmth by capturing lower-end frequencies.

Key takeaway: The AKG Lyra has a wider and flatter frequency response than the Blue Yeti, providing better sound quality through a more faithful reproduction of audio, better vocal capture, and more warmth.

The frequency response and SPL characteristics of the AKG Lyra make it more versatile than the Blue Yeti for recording musical instruments. The AKG adds less coloration when recording audio, resulting in a cleaner, more transparent audio quality.

Key takeaway: The AKG Lyra gives you superior audio capture than the Blue Yeti when it comes to recording musical instruments.

Both mics are susceptible to unwanted background noise.

There are gain control knobs on both mics that you can use to manage this, but if you’re placing them on a desk they can pick up sounds like computer fans, desk bumps, or other sources of background noise. Using a mic boom stand can help to minimize these disturbances.

Other than careful placement or management, the easiest way to deal with noise issues is to use high-quality plug-ins during post-production, like CrumplePop’s noise reduction plug-in.

Both mics may also suffer from plosives during recording due to their good midrange capture. The AKG helps to reduce this with a built-in sound diffuser, but you can also manage it with a pop filter or, again, in post-production with a quality plug-in such as CrumplePop’s PopRemover AI.

Key takeaway: Both mics are susceptible to unwanted background noise and plosives but can be managed through careful placement, mic gain control, a pop filter, or in post-production.

Both being USB mics, the AKG Lyra and Blue Yeti feature built-in ADC.

The specs of the AKG (24-bit at 192 kHz) are superior to the Yeti (16-bit at 48 kHz), meaning there’s a higher resolution sample rate and digitization of sound with the AKG compared to the Yeti. This further supports the AKG’s better sound quality over the Yeti.

The AKG Lyra’s US retail price ($149) is higher than the Blue Yeti’s ($129). It’s also higher than other USB microphones with comparable features, such as the Audio Technica AT2020 USB Plus.

Both mics also come with helpful bundled software: a copy of Ableton Live 10 Lite is included with the AKG Lyra and the Blue Yeti comes with Blue Voice, a suite of filters, effects, and samples.

Key takeaway: The AKG Lyra is priced slightly higher than the Blue Yeti and both come with bundled software.

Both the AKG Lyra and the Blue Yeti are excellent and popular USB microphones. Which is best depends on what you’re looking for: