Home→ Audio Production→ How to Crossfade in GarageBand: Step-by-Step Tutorial

How to Crossfade in GarageBand: Step-by-Step Tutorial

Crossfading is a useful technique in sound production. It consists of a fade-out and a fade-in that are combined to offer seamless transitions between regions of an audio recording.

You may need to crossfade:

Crossfading is very easy to do in digital audio workstations (DAWs) like Logic Pro but is a bit more involved in GarageBand. In this post, we’ll take you through step-by-step, how to set up crossfades in GarageBand.

One downside of GarageBand, however, is that it’s a Mac-exclusive product, so it’s not available for computers running Windows.

If you own a Mac, GarageBand may already be pre-installed, but if not, it’s easy to download from the Apple store.

What is a Crossfade in GarageBand?

A crossfade is simply a combination of a fade-in and a fade-out to create a seamless transition between regions of an audio file. It’s a useful technique to use when:

In these cases, the crossover from one region of the track to another can result in a clicking sound, stray pops, or other sonic artifacts that detract from the final production. Crossfades can help to alleviate these by creating a smoother transition between the connecting regions.

In this post, we’ll assume you’re familiar with how to fade in and fade out in GarageBand—if you’re not, it’s easy to learn how by reading How to Fade Out in GarageBand: Step-by-Step Tutorial.

How to Duplicate a Track in GarageBand

As mentioned, tracks consisting of different regions that have been joined together can benefit from crossfades. For these types of tracks, you’ll need to duplicate the track before you can apply crossfades:

Step 1: Select the track that you want to duplicate

Step 2: Make a duplicate copy of the track

Shortcut:  COMMAND-D to duplicate a track

How to Cut a Song in GarageBand

Sometimes, your song or audio files may consist of tracks that need to be cut into different regions and joined in various ways.

Step 1: Select the point at which you want to cut your track 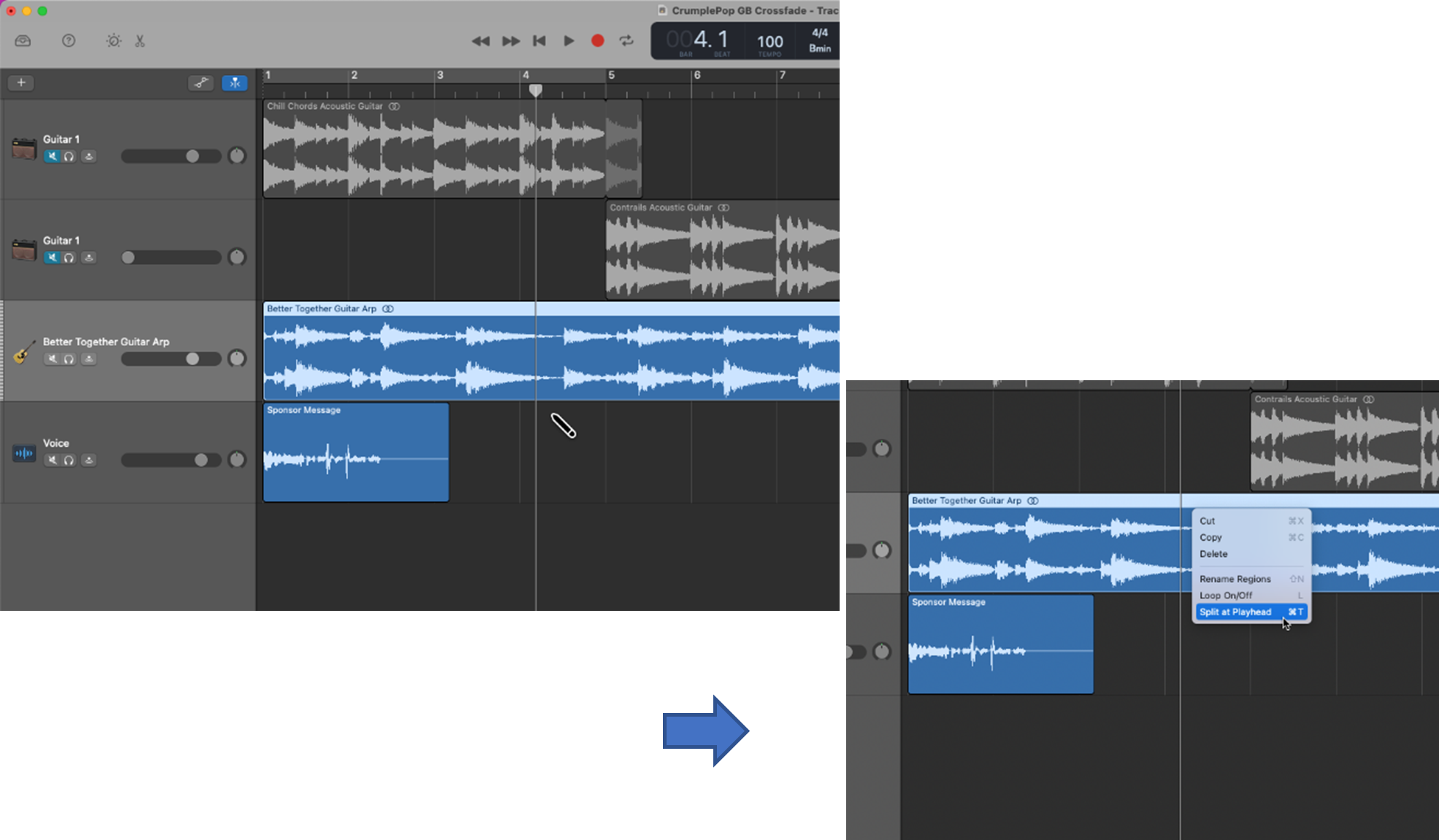 Tip: You can also apply a cut by using:

How to Crossfade in GarageBand

Now that we’ve seen how to duplicate and cut tracks, let’s look at how to crossfade in both cases.

When you duplicate a track in Garageband, the duplicate copy will be empty and ready to take on regions, or audio clips, of your original track.

Step 1: Drag down the region to be crossfaded

Step 2: Create an overlap between regions in the original and duplicate tracks 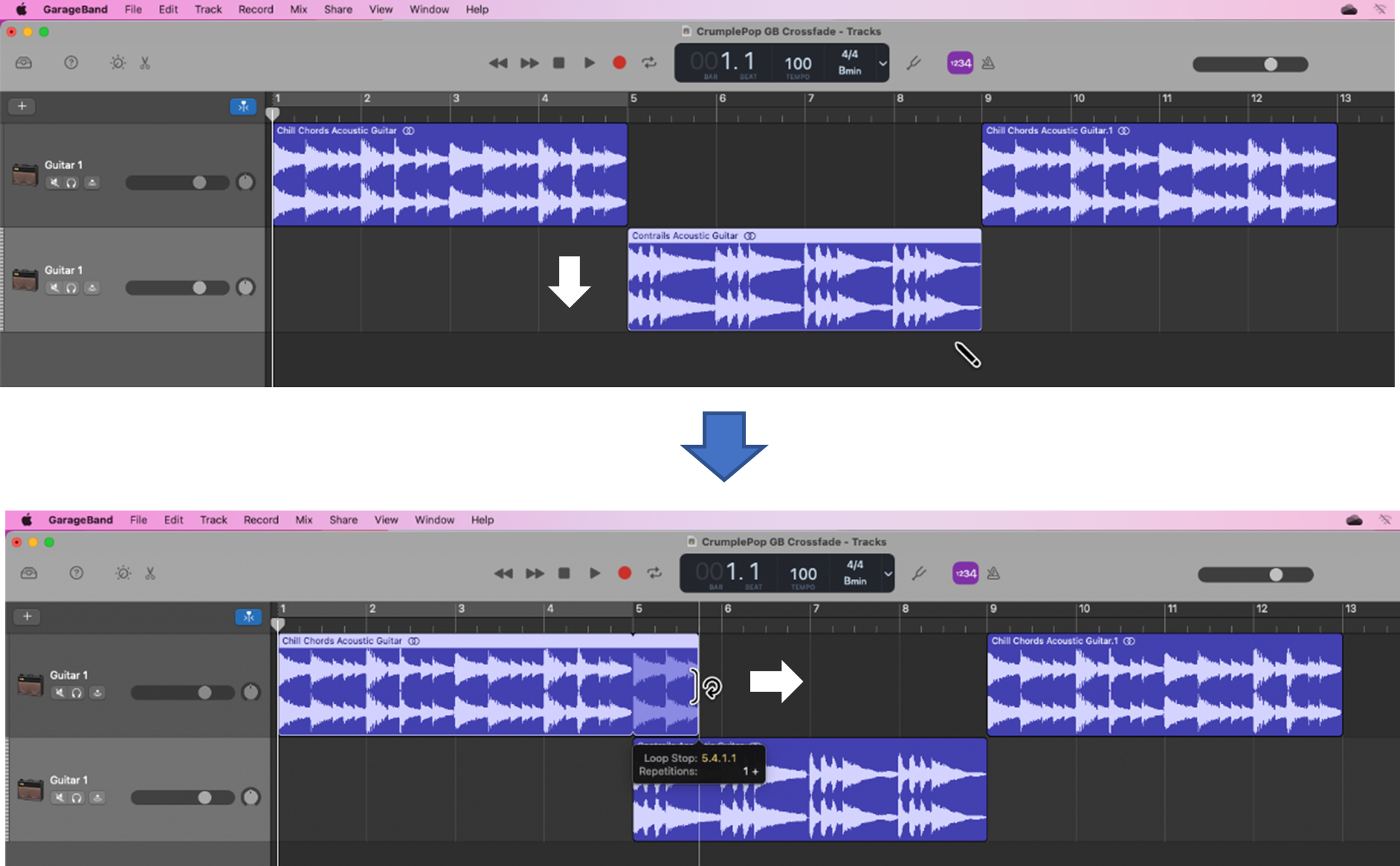 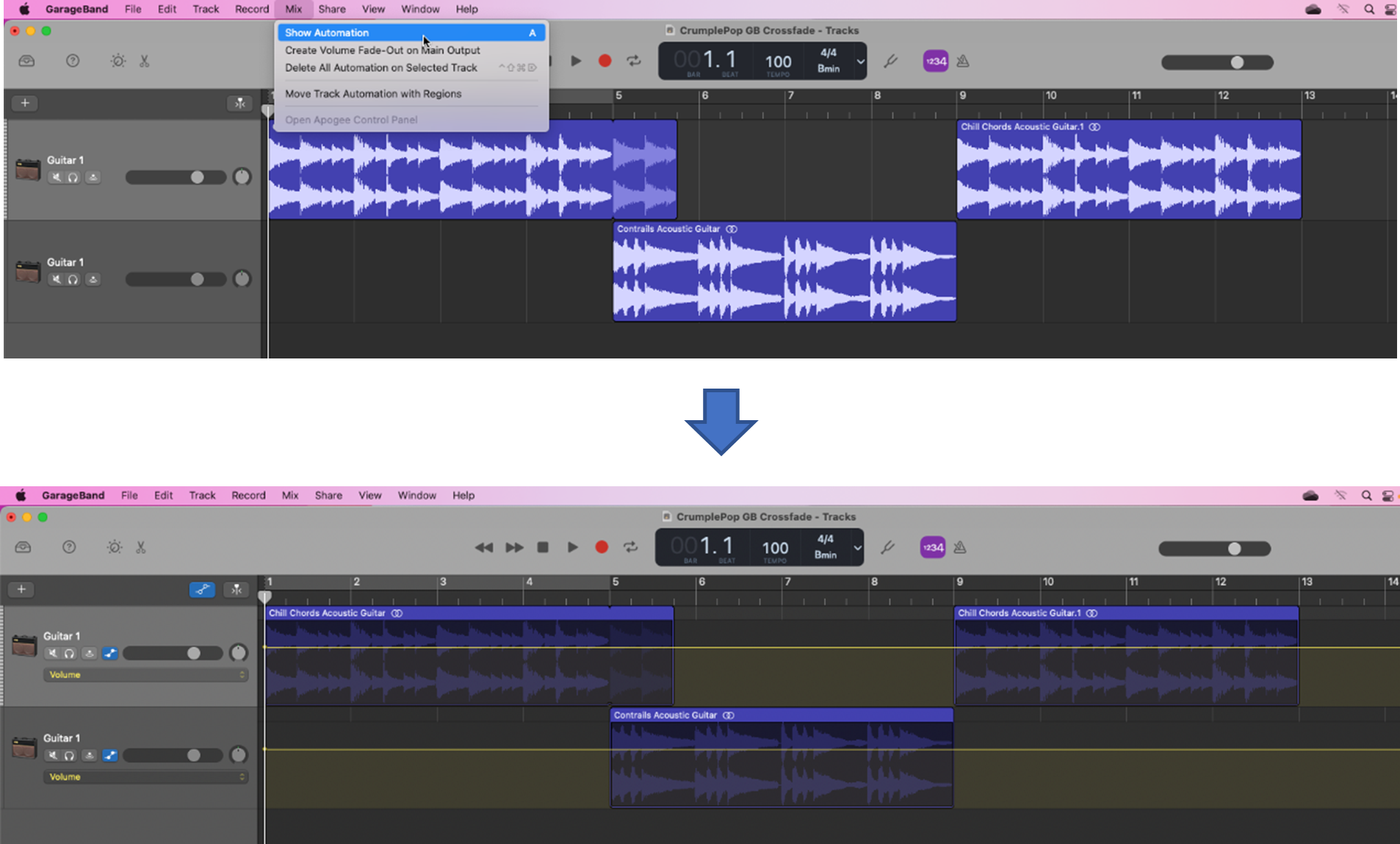 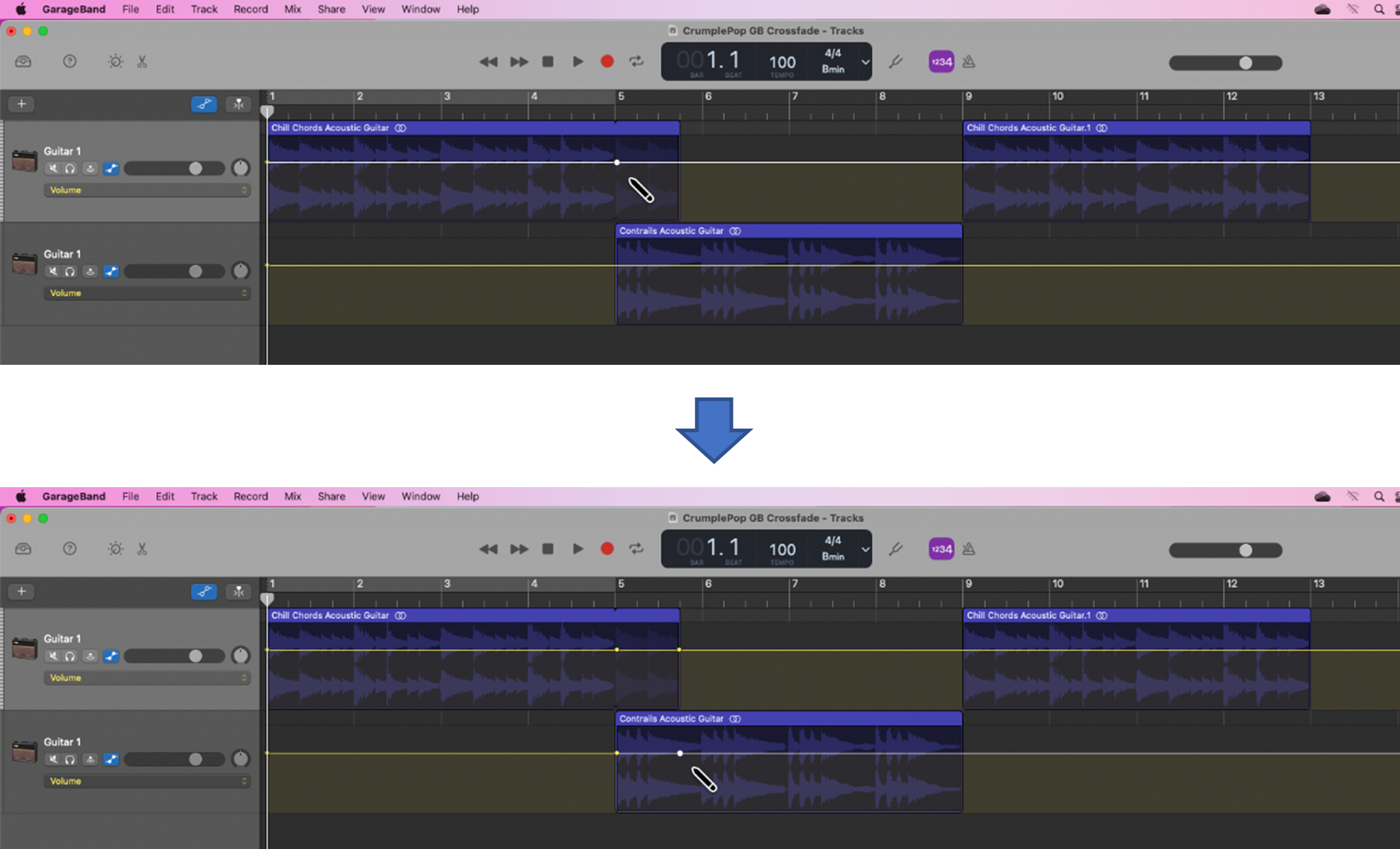 Step 5: Set up the crossfade 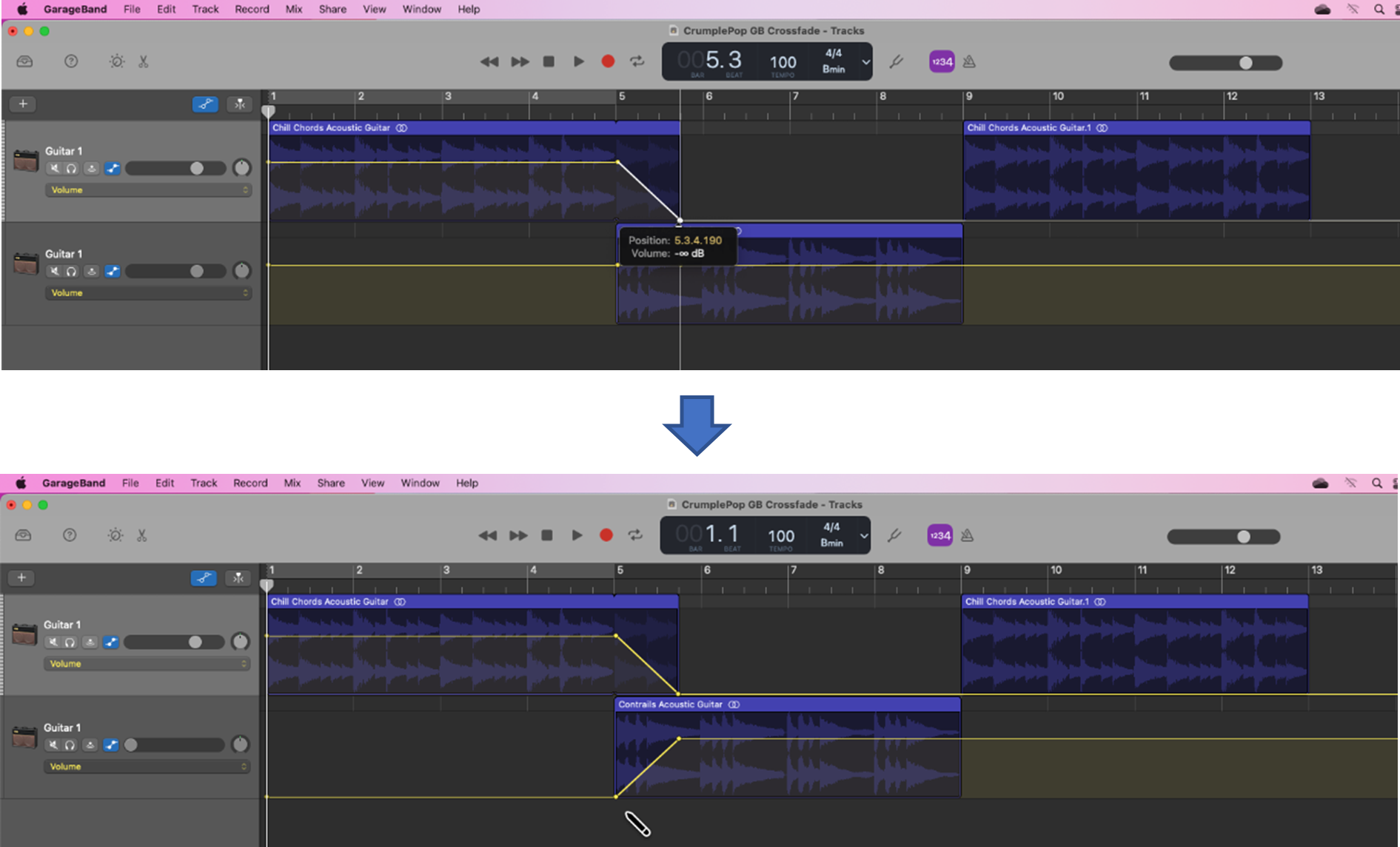 Tip: If dragging a volume point causes a skew in the section of volume line adjacent to the point (rather than bringing the whole section of line down to zero), try grabbing a point on the line just next to the volume point and dragging that instead

Listen to the newly crossfaded tracks—you may need to adjust the time of the crossfade (i.e., the slope of the volume lines) to improve pacing and produce a better result if it doesn’t sound quite right.

You’ll also need to repeat the process at the other end of the crossfade region to complete the crossfade (see step 4 in the next section).

To crossfade cut tracks in GarageBand, the process is similar to crossfading duplicate tracks, you’ll just need to move your regions around depending on where you’ve made your cuts and where you want to crossfade. 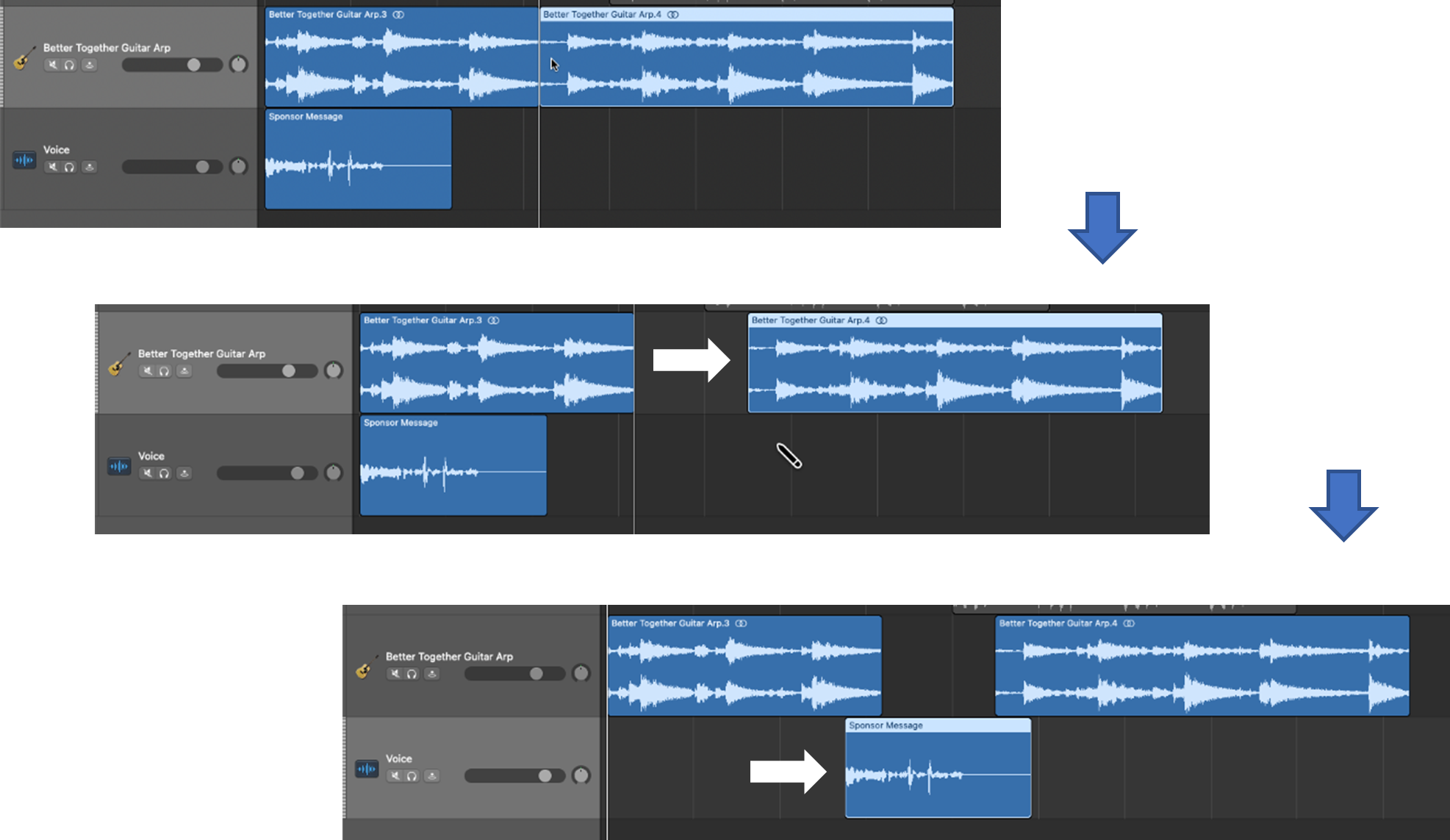 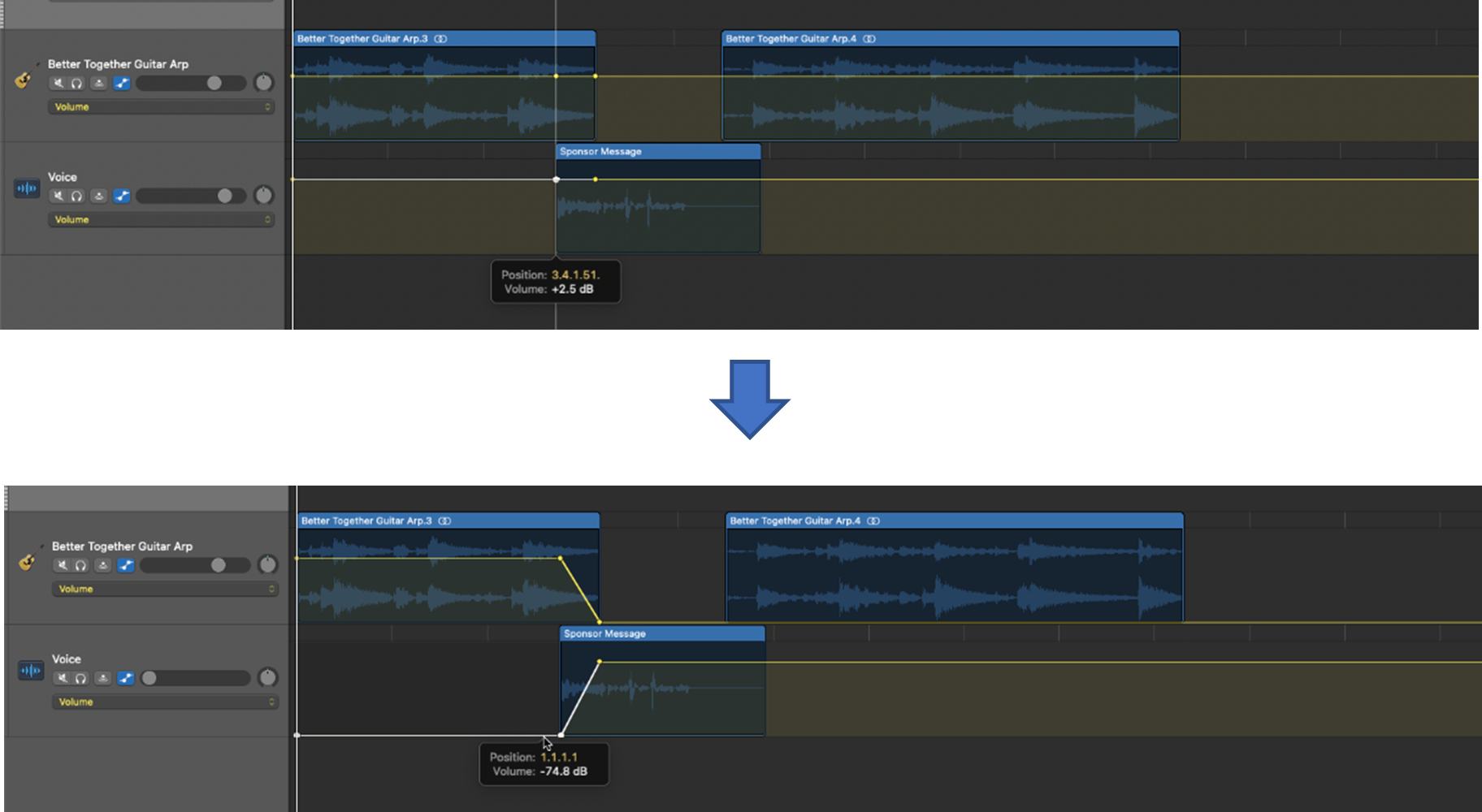 Step 4: Repeat step 3 at the other end of the crossfade region 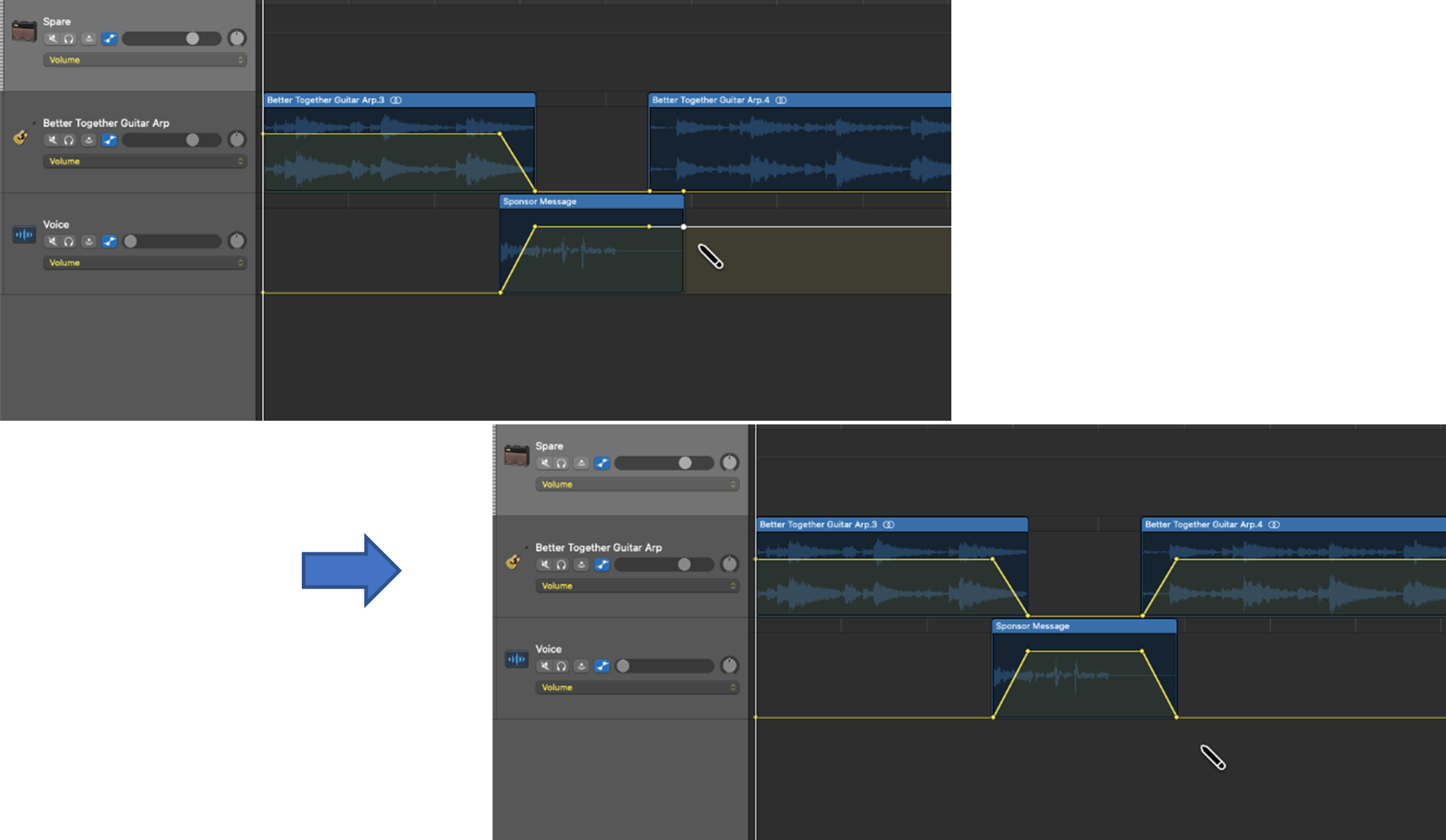 You’ve now completed a fully crossfaded region! Notice how the shape of the completed crossfade looks a bit like an X, i.e., a cross, which is what gives the cross-fade its name.

Crossfading is a great technique for combining regions of audio tracks into one audio file seamlessly. It helps to eliminate the stray sounds that can creep in when these regions are joined.

And while crossfading isn’t as straightforward in GarageBand as it is in DAWs like Logic Pro, it can be done quite easily using the steps outlined in this post.