How to Change Aspect Ratio in Final Cut Pro: Step by Step Guide

With the rise of social media and screens of different kinds, videos and images have come to be represented in different ways. To be fair, videos have always had varying dimensions, but as these dimensions change, it is important for creators to know how to work their way around them.

For filmmakers and editors, especially those new to the software, learning how to change a video’s aspect ratio in Final Cut Pro may be a bit of a challenge.

What is Aspect Ratio?

What is Aspect Ratio? The aspect ratio of an image or video is the proportional relationship between the width and height of that image or video. To put it simply, it is the parts of a screen occupied by a video or other media types while it is being displayed on said screen.

Final Cut Pro is Apple’s famous professional video editing software. If you work with a Mac and want to change a video’s aspect ratio, you can reliably do that using Final Cut Pro. It allows you to repurpose projects that have standard horizontal aspect ratios.

These options are usually displayed according to their resolution values.

How to Change Aspect Ratio in Final Cut Pro

Here’s a step-by-step guide on how to change aspect ratio in final cut pro:

Final Cut Pro also has a Crop tool for more old-fashioned editing if you’re so inclined. You can easily find it by clicking the pop-up menu in the lower-left corner of the viewer. 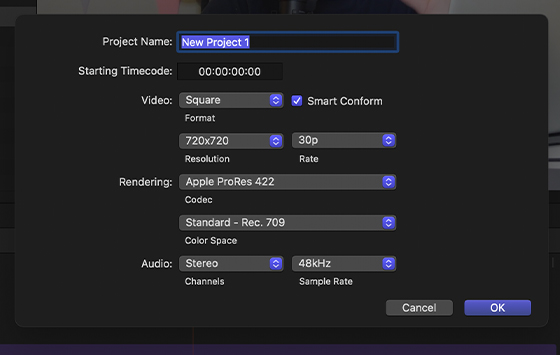 Final Cut Pro offers users the Smart Conform feature. This lets Final Cut scan each of your clips for the details, and preemptively reframes clips that differ from the project in terms of aspect ratio.

This feature also lets you quickly create an orientation (square, vertical, horizontal, or widescreen) for your project, and make manual framing choices later.

Once selected, Smart Conform analyzes the clips in your project and “corrects” them. You’re allowed to do an overscan of your corrected clips, and manual reframing if needed using the Transform feature.

Why Should We Change Aspect Ratio for Video?

Why is it important to know how to change aspect ratio in Final Cut Pro? Well, aspect ratio is important in all creations with a visual component. For the same content to travel from a Mac to television, YouTube, or TikTok, adjustments need to be made to preserve features and details.

TV sets, mobile phones, computers, and social media platforms have varying aspect ratios for various reasons. As a Final Cut Pro user, being able to change your aspect ratio on a whim is a skill you want to have.

If the aspect ratio of a video is not well adjusted to a television screen, it will be compensated for by letterboxing or pillar boxing.  “Letterboxing” refers to the horizontal black bars at the top and bottom of the screen. They appear when the content has a wider aspect ratio than the screen.

“Pillarboxing” refers to black bars on the sides of the screen. This occurs when the filmed content has a taller aspect ratio than the screen.

For the longest time, most videos have had horizontal dimensions with some minimal variation. However, the ascent of mobile devices and the concurrent social media networks have led to media files being consumed in otherwise unconventional ways.

We are embracing the portrait format more and more every day, so content has to be adapted to every valid platform to boost visibility and cater to users.

This has become an important part of post-production – creating many versions of video content with each one having a different aspect ratio.

Even within a platform, there may be the need for different aspect ratios. A good example of this is seen in two of the more popular social media houses in the world, YouTube and Instagram.

On YouTube, videos are uploaded and consumed mainly in a horizontal format, and viewers access them through smartphones, tablets, laptops, and nowadays directly via television. However, there are also YouTube Shorts, which are usually vertical in a 9:16 ratio.

On Instagram, most content is consumed vertically and in a square format. However, there is the Reels feature where videos are portrayed vertically but on fullscreen.

Therefore, if you want your work to appeal to multiple crowds even within the same social network, being able to change the aspect ratio of your videos is a must.

As a beginner video editor, you may find Final Cut Pro a bit difficult to work around. If like many, you’re wondering how to change a video’s aspect ratio in Final Cut Pro, this guide should help you.